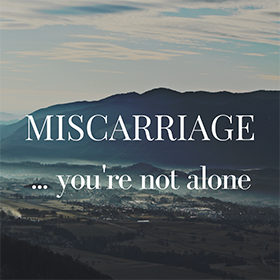 Why do we all feel so alone with a pregnancy loss? Given that women are having babies so much later, in their 30’s and 40’s, miscarriages are so much more common that you think.

How common is miscarriage?

Studies show that 10-25 percent of all recognized pregnancies end in miscarriage. This does not however include what are called ‘chemical pregnancies’, where a pregnancy is lost shortly after implantation, around the time the expected period is due or a few days later (1).

Miscarriage rate after ultrasound confirmation of pregnancy has been studied to be approximately: (2)

On a positive note, once a fetal heartbeat has been confirmed, women in their late 30’s and early 40’s have a very good chance of continuing a pregnancy. To be specific, after confirmation of a heartbeat at 7-10 weeks pregnancy, the risk of subsequent miscarriage for women over 40 even drops to about 10% (3).

Paternal age also increases miscarriage risk. One study found that if the father was over 40, there was a 60% increase in having a miscarriage (4). Another study found approximately a 25% increase risk of miscarriage when fathers were over the age of 35 (5).

At least 50% (6), and some researchers report 75-90% (7) of first-trimester miscarriages, and 20% of second-trimester miscarriages are caused by chromosomal anomalies. Read that again. What that means is that there was nothing you could have done to prevent it – your body simply lets go of a pregnancy that is not healthy.

For the remaining low percentage of pregnancy losses, there are many other potential causes which include:

Late miscarriage (after 10 weeks), has other potential causes such as abnormalities in the uterus (uterine septum), fibroids, incompetent cervix, abnormal placenta attachment or infection). Late miscarriages are very rare.

What does NOT cause miscarriage?

There are many misconceptions about what may cause miscarriage. They are not caused by a minor fall or accident, stress or emotional upset, sex, exercise, heavy lifting, or too much walking. If you feel that some vigorous activity has caused a miscarriage, it likely accelerated a process that had already begun.

Many couples struggle after a miscarriage because they haven’t told anyone about the pregnancy yet, and feel quite alone. It really is too bad that so many of you are going through this alone, because the statistics and my observation show that most women in their 30’s who have had several pregnancies, have had one miscarriage. Perhaps if we start speaking about this more, the losses would be easier to bear.

Following a miscarriage, bleeding may continue for up to 2 weeks, and uterine cramping should settle down significantly after a few days. Beware of iron deficiency after a miscarriage, especially if there was heavy blood loss, and be very gentle with your body for the next few weeks. Eat nourishing foods: plenty of vegetables, dark leafy greens, protein with each meal and lots of fluids.

You may be advised to measure pregnancy hormones levels (beta hCG) to confirm that the miscarriage was complete. If bleeding persists, a pelvic ultrasound is recommended.

When can I try again?

For the majority of first trimester miscarriages, wait for a normal period to come, and then you can try again as soon as you feel ready. The past suggestion of waiting 3 months before trying again, has been disproven (8,9), meaning there is no increased risk of a subsequent miscarriage if you get pregnant again right away. If you had a later miscarriage (after 12 weeks) however, it may be wise to wait a cycle or two for your body to fully recover before trying again. Emotional readiness is the most important factor.

Again, remember that in in most cases a miscarriage is caused by chromosomal abnormalities which you could not have prevented.

As a naturopath, the following are areas we focus on first:

If miscarriage happens again, and especially if you experience three or more pregnancy losses, a thorough investigation with a reproductive endocrinologist is highly recommended. There are additional tests that your naturopath and family doctor cannot order to asses more thoroughly.

I hope that this short article has shown you that miscarriage is quite common, and that you’re not alone on this journey. Be gentle with yourself, and let’s start the conversation, so fewer women feel isolated as they are going through this.

Disclaimer
Please note that content on this website is intented for informational purposes only, and is not intended as a substitute for the advice provided by your physician or other healthcare professional, nor is it meant to diagnose or treat a health problem, symptom or disease. Always speak with your physician or other healthcare professional before taking any medication or nutritional supplement, or using any treatment for a health problem. If you have or suspect that you have a medical problem, contact your health care provider promptly. Do not disregard professional medical advice or delay in seeking professional advice because of something you have read on this website. Information provided on this website DOES NOT create a doctor-patient relationship between you and any doctor affiliated with our website.